“This Will Go On Your Permanent Record!” 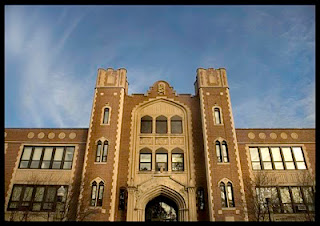 There used to be a time when school teachers, and/or school principals, would toss out the threat about what would accumulatively be lurking inside the hidden documents that culminate in your life.

Many would cower in fear if that instructive mantra was vocalized in their direction, usually with an accusatory finger wag for good measure, to get them to toe whatever line the educational overlords were trying to drive home.

In an era that predated computers and hard drives, you envisioned some large monolithic government building somewhere, teeming with reams of paper in file cabinets devoted to every transgression you ever committed or even thought of.

You probably didn’t give that file a second thought after a threat was levelled, until some point later when you went out into the job market for the first time. Perhaps you were filling out an application for a part-time job handing out flyers in a chicken suit outside “Bob’s Bucket O’ Beaks” when it hits you that maybe the day, back in the third grade, when you gave Eddie Terwilliger a pink belly during recess, might finally come back to haunt you and crush your dreams of wearing a giant foam head.

Or your thoughts of getting into the prestigious college that your parents have bankrupted themselves to cover your tuition costs, have been dashed because, contrary to what your classmates said in Grade 5, Mrs. Johnson didn’t like your rendition of Stars & Stripes Forever played in underarm farts.

It’s just amazing how the line, this will go on your permanent record, had such a controlling effect on large portions of the youthfully naive population. Those were simpler times. However, in today’s information age, even with the capability of collecting massive amounts of data on just about everybody who ever roamed the earth, that line has become somewhat of a quaint idle threat. That’s because today’s youth are creating their own permanent record far more damaging than any of their teachers could have ever possibly dreamed up.

Today’s permanent record consists of Twitter tweets, Facebook status updates, sexting, and YouTube uploads that leave a permanent trail of stuff that you might have thought was either terribly amusing or pithy at the time that it was placed. You may have even forgotten about them and moved on with your life. But now every potential employer, insurance company or financial institution has the opportunity to “go to the cloud” and find out everything you’ve done since you first figured out how to type.

And it’s not just the trail of what people say about themselves. It’s also the way people talk online about, and to others. Read many of the comments to newspaper articles, blogs, videos, political websites or any other forum where one can spew, and you will usually find a diatribe of unhealthy discourse that, sadly, many of the authors are under the misguided theory that none of their words can be traced back to them. The pen is mightier than the sword, but a pen can only do a small percentage of the damage that a keyboard can.

The term “social network” is bandied about so often today. Used correctly it is truly a marvellous thing. However, as the online community continues to grow and spread around the world, I’m finding that there is way too much “network” and far too little “social.” It seems that a large percentage of the population might end up with a very unflattering permanent record.

That’s the Stuph – the way I see it
Posted by Peter Anthony Holder at 2:31 AM