I am reminded of the day back in August 1977 when Elvis Presley died. It was said that an unnamed industry insider, upon hearing of the untimely death of the 42-year-old hip-shaker, was quoted as saying, “good career move.”

As history shows, truer words were never spoken. In the years since his death, Elvis has become wealthy beyond his wildest dreams. Too bad he’s not around to enjoy it. And in a world that is obsessed with lists, which follows closely behind the other obsessions of money, youth and thinness, it should be noted that Elvis regularly topped the list of room temperature money earners up until 2006 when Kurt Cobain became the top annual earner of cold, hard cash, while cold and hard himself.

Well, Cobain now has to look over his shoulder, not at the still top earning King of Rock & Roll who is at number two, but at the newly deceased King of Pop. Michael Jackson, who himself was quoted as saying many years ago that he didn’t think he would make it to 40, surpassed his own prognostication by a decade to make it just two months shy of his 51st birthday.

Jackson’s place in history is now secure. He already had the largest selling album of all time in Thriller, with very little chance of anyone coming close to catching it and now with his death you can surely tack on the several million more copies that will be flying off the shelves in the next little while.

Jackson was working hard for his upcoming farewell concerts in London – concerts that were a necessary comeback due to his alleged precarious financial situation. He had some major debts, creditors hunting after him like wild villagers with pitchforks and torches and an armada of lawyers who were always squelching the revolving door of lawsuits that seem to highlight his career. Plus his extravagant lifestyle did come with a cost.

Well now, it’s just simple Economics 101: Millions upon millions of dollars will now be coming in, and Michael won’t be around to spend them. No more wild shopping sprees, no more clothes for chimps, no more hyperbaric chambers, no more plastic surgery. Jackson’s death might just turn the economy around, and without a bailout! Everyone and their sister will probably try to cash in on Michael’s death (hey, I might make about a whole eight cents myself from blog traffic!)

And let’s not forget how prolific and talented Michael Jackson was. For everything he released, that turned to gold, there has got to be a plethora of material, in various stages of completion, that is locked away somewhere. If Tupac Shakur can somehow manage to crank out albums long after his last breath, just think about what the “Gloved One” could churn out.

Since his death Elvis Presley has spawned an entire industry of Elvis impersonators . . . oh, sorry . . . tribute artists, who have done quite well for themselves over the last 30 years. Well Jackson has had many impersonators while he was still breathing! Imagine how that’s going to mushroom now posthumously!

Something else that is secure will be our memories of Michael. As freakish as he may have become in the last few years, I would have to believe that it would have only gotten worse in the years to come. Michael Jackson would not have aged gracefully and youth is a virtue that is put on a pedestal in our society. Those who have died relatively young, Elvis Presley, John Lennon, Bob Marley, James Dean, Bruce Lee and even John F. Kennedy, have had their images enhanced because of an early demise. Their pictures never age. They are forever young.

Although we still think of Mohammad Ali as “The Greatest” and film footage and posters take us back to an earlier time of his power, you’d have to admit that there is a slight tarnish of his image only because of his more recent Parkinson’s-riddled appearances. How could this be the same man who was standing over Sonny Liston taunting him to get up?

Jackson no longer has the opportunity to continue to turn himself into a living version of a Salvador Dali painting (just what would the stats listed on a Michael Jackson driver’s license be anyway?) He kept altering himself like a tailor with ADHD. After years of being “under construction” we sadly now have the final product.

So let’s not say goodbye to Michael. He’s really not going anywhere, except onto the Forbes list of money making dead people. Let’s just hope that this tortured man with the Peter Pan complex will finally achieve the peace that clearly eluded him in life. Let’s enjoy his catalogue of existing music and listen with a jaded ear to what’s sure to be a vault-load of previously unreleased “Jackson classics” because as far as careers go, Michael Jackson has just hit the mother lode.

And finally, if you believe that there is a heaven, then just imagine what this week’s Tonight Show is like on the other side of the Pearly Gates. Ed is back with Johnny, Farrah’s on the couch and Michael is performing. What a show!

Does Anyone Play Solitaire With Actual Cards? 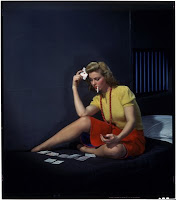 As I am writing this, I am currently sitting in a doctor’s office waiting room for yet another appointment (I seem to be doing that a lot lately). As I look around the cramped outer office I am both comforted and disturbed by the fact that, as usual, I appear to be the youngest person waiting for the doctor.

I have my iPod and of course my laptop to pass the time away, but there is one serene older lady who when she sat down she simply opened her purse and pulled out knitting needles and proceeded to furiously knit away. I don’t know if she was knitting baby booties or a car cozy. All I know is that she was blissfully in her own world and with very little technology to do it.

It got me to thinking what a wait in a doctor’s office or airport would be like 30 or 40 years from now. Would people be content with simply reading a book or quietly knitting or would technology take over with everyone hooked up to a giant monolithic computer somewhere doing their own thing rapidly typing on keys and moving around a mouse, assuming we still have those archaic rodents by then.

Something else that I noticed at the doctor’s office is that the receptionist had a city telephone book and the Yellow Pages by her desk. These are two back breaking tomes that are delivered annually to homes and offices everywhere. The growth in population has facilitated the increase in size of the phone books, while simultaneously shrinking down the font so that all the names and numbers can fit. This sadly coincides with my aging eyes which are now starting to have problems with the font, designed to make everything fit but is impossible to read.

Luckily for me, like so many people, the last time I cracked open a phone book was around the time that I played Solitaire with real cards. What’s the point? Everything that’s in the phone book is online, in a much easier to read fashion and, in most cases, more up-to-date than the dead tree version. It seems to me that each year all I seem to do is pick up the new phone books as they are dropped at my door with a thud, only to throw them out twelve months later just as pristine as they were upon arrival. It’s about time we put an end to these doorstops.

Still, there is one aspect of technology that I just don’t have use for. It seems that these days our urban society is obsessed with GPS units. It wasn’t that long ago that in the war between the sexes you could hear the battle cries of many an exasperated wife saying, “Why, don’t you just stop and get directions?” To which you would hear the male response of, “Why don’t you learn how to read a map, and for the love of God, can’t you fold it back properly?”

But technology has wrought upon us the GPS, the joy of every gadget freaked male. Problem is, some people are depending on their units way too much and forgetting the simple rules of common sense, such as look at the road in front of you. I have come across a myriad of stories recently of dimwits who insist on following their GPS instructions come hell or high water or cliff.

In the UK, while driving along a narrow, steep path in Todmorden, West Yorkshire, businessman and human lemming Robert Jones was anal-retentively following the instructions of his satellite navigation unit when it told him to turn down an offshoot road. End result? His BMW went down the path, smashed through a fence above a railway bridge, and dangled precipitously off of a sheer cliff.

Earlier this year in Bedford Hills, New York another auto lemming trusted the GPS in his rental so much that he apparently thought it was perfectly reasonable to follow the directions directly onto a set of train tracks. That didn't exactly work out so well, for his car or the oncoming train. It is sad to say that he wasn’t the last person to have his vehicle cubed on the exact same track. Another man followed his GPS onto the very same set of rails and, while he did get out in time to make a surely embarrassing 911 call, that apparently wasn't enough to prevent a commuter train from slamming into the car a few minutes later.

And back in the UK, drivers going through the village of Luckington have driven right into the river by following their navigation systems. This is despite all the warning signs that the bridge has been closed. The village has had to tow two cars a day on average.

Are we headed for a point when people won’t be able to make a move without a computer? It is important to remember how to drive on our own, to use our own common sense and to tax our brains enough so that they don’t shut off completely. We need to remember where the road ends; just as we need to remember how many cards make a deck. Because if we continue to abdicate from our minds behind the wheel, then we might as well just sit in the passenger seat and play Solitaire.