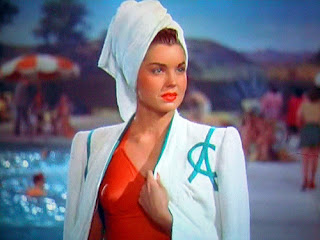 Stuph File Program listeners, another video slide show is here. This one hails from June’s show #0199. It's a retro interview from my celebrity audio archives that features a talent who, sadly, is no long with us.

This was one with the legendary swimmer, Esther Williams. At the time that we spoke back in June of 2002, she was still a very active 80 year old who was embarking on a new business as a co-producer and promotional spokesperson for a show called Aquaria that was to be done in Las Vegas. Sadly, that project never got into the water.

After her 1962 marriage to Fernando Lamas, her co-star in Dangerous When Wet she retired from public life.

Esther was an absolute joy to talk to. We chatted for over an hour and she was engaging and warm and thoughtful. She told great stories and it was clear that she enjoyed the wonderful life she had in the public eye and more importantly, enjoyed every moment that she was in the pool.

Watch the slide show on YouTube while the audio plays! Share the link with fans of Esther Williams. And don't forget to dry behind your ears.

Posted by Peter Anthony Holder at 11:12 AM