The Lack Of Common Sense 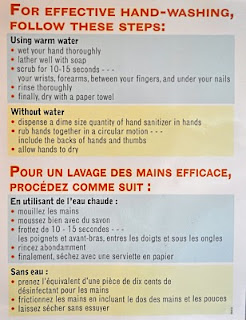 There was a time when it seemed just about everybody had what was called “common sense.” An idea of what should be done in certain situations in life. One can debate whether common sense is something that we are born with, or that is instilled in us by our parents. Either way, it tends to be something that all of us possess (thus the word “common”).

But lately I have been seeing situations that lead me to believe that this “something,” has gone the way of black and white television and buggy whips.

Case in point is the picture of a sign that accompanies this essay. I see this sign almost every day. It is a sign that is in the men’s room on the floor of the office tower that I work in. This is an extremely detailed sign explaining to adults the proper way one should wash their hands.

Now, I’ve managed to survive my childhood, getting through the educational process. In my grade school, at the tender age of six, when I was just learning to grasp the intricacies of the written word in the English language, I didn’t have a detailed sign like this one explaining the proper procedure in hand washing.

I suspect that one of the reasons is because at six, I had already had it drilled into my head, both by my parents and also by my kindergarten teacher the year before, as to what to do when my hands come in contact with water, soap and a sink. Yet, here I am, almost a half century later, being told how to wash my hands.

At least the sign suggests that perhaps we are adult enough to make our own choice of washing our hands with, or without water. Still, with the no-water option, I do find it somewhat vague. It mentions “rub hands together in a circular motion.” It does not, however, instruct us as to whether that circular motion is clockwise or counter-clockwise. Then again, with our complete loss of common sense, and the fact that the whole world has gone digital, perhaps they assumed we wouldn’t know what clockwise was.

I also find it interesting that in the washing-with-water option, you are to “scrub for 10-15 seconds . . . your wrists, forearms, between your fingers, and under your nails.” This method reminds me of every medical show I’ve every seen where a doctor is scrubbing in for surgery. But do I really need to clean all the way up to my elbow after using the washroom? Just how sloppy are some people in there? Have they been helping to birth a calf? If I’m in need of doing something in a public washroom that requires washing my elbows, I either need serious medical attention, a complete change of diet or an exorcist.

But, I guess under the banner of better safe than sorry, the powers that be feel it is important to give the information because, as some recent statistics show, while 85% of public restroom users wash their hands . . . up from 77% in 2007 . . . men are still dirtier. About 23% of men failed to wash versus 7% of women; this according to some restroom spies.

So even though I’m thorough, and therefore feel insulted by the signage, I’m still faced with a major dilemma. If 23% of guys are not washing their hands at all, then after I meticulously finish up, just how do I get out of the washroom? The only thing between me and freedom is that door knob that a quarter of my gender has touched . . . uncleansed!