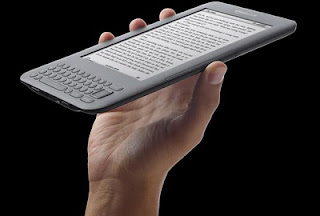 As the second decade of this millennium kicks off, I have entered the world of e-readers with the purchase of the Amazon Kindle

and I have now turned into a Kindle Evangelist! One cannot fully express the glee I feel as I quietly turn pages on the lightweight instrument. This has got to be the greatest thing to happen to reading since the advent of the printing press.

Not being one who is known as a voracious recreational reader, I have nonetheless read more books in the last month than, sadly, I have sometimes read in a year.

Those mundane moments that were often filled with boredom in life have vanished. Waiting at a doctor’s office . . . Kindle! That long Saturday cashier line-up at Costco . . . Kindle! Stolen moments taking a break at work . . . Kindle! How did I manage to survive without it?

But with this latest technological marvel, we have created yet another item that drives a wedge between you and social interaction. While the whole world seems to be on Facebook or are texting each other, very few people seem to be actually talking to each other. I’m just as guilty.

At the aforementioned doctor’s office I was quietly reading my Kindle. The sheer novelty of it brought questions from some of the other clientele who wanted to know about the newfangled instrument. I politely answered their questions, but inside my head the only sentence that kept playing like a mantra was, “I’m reading my Kindle precisely because I really don’t want to talk to you!”

At least I remained civil and answered the questions, unlike the woman at the pool in the Kindle commercial whose snarky response to the query of how she was able to read in bright sunlight, was to quote the price of the Kindle as compared to her expensive sunglasses (in a Walter Mitty world I kind of envisioned her later being “bitch-slapped” with the guy’s iPad).


Sadly, as Kindles, and other units like it, become more commonplace, members of society will be even more in their own little world, oblivious of what’s going on around them. Kindle could become the adult reader’s drug of choice, much like a Nintendo DS is the elixir of many a child. When you’ve driven on highways haven’t you noticed that children rarely gaze out the window anymore? Their faces are buried in some device, thumbs at the ready, while the wonders of the outside world literally pass them by. Well, except for the driver, (at least I hope except for the driver) the adults are headed down this same road.

Now, this is only a mild cautionary tale, because, like I said, I do love my Kindle. And it’s hard to find something wrong with anything that will get people to read more. I’ve even shown interest in re-reading some of the classics that I was forced to absorb in high school. Back then, my concern wasn’t the quality of the novel, but rather, can I get this thing read in time, and what pearls of wisdom can I glean from it that will enhance my mark? I’m sure books like To Kill a Mockingbird, Of Mice and Men and the written play version of Death of a Salesman were all vital parts of my early development but they were lost on me. I would like to read them now and actually enjoy them. As a major James Bond fan, I would also like to read the collected works of Ian Fleming, in the order in which he wrote them in. My wish list of reading material, both old and new, is a lengthy one.

It’s not only the Kindle unit that I have nice things to say about. The customer service at Amazon has been truly remarkable. Regular readers may remember my plight last year with Timex in my blog piece Is Customer Service Running Out Of Time? Well, that watch company can learn a thing or two about how to treat those who purchase their products. I won’t go into detail, but suffice it to say that I’ve had to deal with Amazon.com on several occasions and in each case I couldn’t possibly be happier with the outcome.

From cave drawings, to Sumerian Logographs, to Johannes Gutenberg’s press we’ve come a long way. A marvel of technology literally held in the palm of your hand. Amazon is to be commended. It truly is e-mazing! (oh-oh, I’ve used one of those catchy 21st Century phrases).

Now, if I could just remember the face of the person who sat next to me for two hours at the doctor’s office.

Posted by Peter Anthony Holder at 2:56 AM