Are We Getting Squeezed? 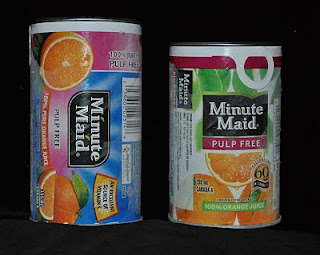 At first I thought the problem was the aging process. As we get older our eyes aren’t what they used to be. The small print looks smaller, items are fuzzier, and sometimes even your depth perception might be a little off.

But the distance between perception and reality might not be that far apart and might not be because of age. In the 21st Century our buying power is shrinking and along with it the very items that smaller dollar buys. It’s starting to feel like you’re shopping in Barbie’s supermarket or a grocery store for Lilliputians.

Take a look at the accompanying picture. Ironically the latest item we are getting squeezed on is orange juice. On the left is the orange juice I purchased on a previous trip to the supermarket. On the right is the most recent version of the same juice from the same store. You will note that Minute Maid has come up with some snazzy new packaging, but it doesn’t take an eagle eye to notice that the packaging is somewhat smaller. And although the can is smaller, the price is not.

The change here is not even subtle. My favourite ones are bottled items such as some jams or peanut butter jars, where they didn’t make the packaging any smaller. Instead what they did was make the bottom more bulbous on the inside so that it takes less of the product to fill the jar. Now that’s deceitfully clever.

But it’s not just my orange juice can that is shrinking. A little known secret just coming to light is what some clothing manufacturers are doing with their sizes. They are outright lying! Some companies are now making their clothes the same size, but tagging them as a size smaller, giving shoppers the misguided impression that they are still fitting into a size six dress or a 32-inch waist pair of pants. One need only look around North America to know that collectively, our dollar might be shrinking, but we are not.

Those who rail against consumerism and our North American lifestyle are probably crowing that all of this is for the best and we are just now reaping what we’ve sown. Perhaps our purchases need to be smaller and after all, don’t all these lighter packages mean we’re carrying less home in our cars, thereby saving on the precious fossil fuel we depend on so much?

That’s not something I’m so sure about. What I do know is that I seem to be driving to the supermarket more often now for orange juice.

That’s the Stuph – the way I see it.
Posted by Peter Anthony Holder at 7:29 PM