Weeding Out The Baby Boomers 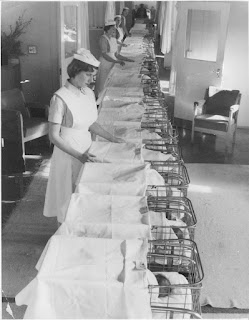 It’s been 65 years since the first of our lot came screaming into the world; a generation of kids who by sheer numbers alone were destined to change the human psyche forever. And during that time society, with quite a bit of help from Boomers themselves, has worked hard to eradicate us from the planet.

We are the offspring of what has been called the greatest generation. It only stands to reason that a group of people who could survive childhood through The Great Depression, only to then be immersed in the second world conflict in less than 25 years, also possessed bullet-proof eggs and sperm of steel. When World War II was finally over, that group pumped us out like rabbits on speed.

Just to give you an idea of the numbers, Boomers are considered to be those born between 1946 and 1964. During that 19 year time frame in the United States alone 79 million took their first breath. By contrast, the following 19 years in the U.S., which had a much larger population, only saw 66 million births.

There is something to be said for strength in numbers, because as I’ve already stated, society as a whole has done everything it can to kill us off. Look at the facts, Boomers. You can probably sit and think of the kinds of things you did, legally or otherwise, that you wouldn’t let your own child do on a dare.

Let’s start with the toys we grew up with. Games like jacks which involved a small rubber ball and several metal objects bearing six tips at right angles. Surely this was designed to get rid of some of us just by swallowing.

Then there was the Slinky. This was a metal helical spring that was most fun when playing on the stairs! If you sent a kid out to play on a staircase today, someone would be calling child services!

Another toy manufacturer thought they could cull our numbers by coming out with lawn darts. They assumed that if they had “lawn” in the name then that’s the only thing these spears would plunge into.

One of my favourite toys was a spy gun set called Secret Sam. This was a gun that could shoot hard plastic bullets from inside a briefcase. I shudder to think how many eyes were lost with this item that adults gladly put under the tree for us at Christmas. The only thing our parents seem to fear back then was us running with scissors.

Our collective Moms and Dads readily smoked and drank around us. In the car they allowed us to not only sit unencumbered by safety restraints, but even stand on the back seat while the vehicle was in motion at high speeds. Today it’s against the law to have a child who is less secure in a car seat than John Glenn was on that maiden voyage into space aboard Mercury’s Friendship 7.

And what about the things we’ve done to ourselves. Our fathers jumped out of airplanes to secure democracy and eradicate tyranny in Europe. We jump out of planes for fun. We also jump off of bridges with giant elastic bands around our ankles for the shear thrill of it.

We’ve created the term “recreational pharmaceuticals” and navigated through the sexual revolution which gave us a host of diseases like Herpes, which became the early warning device, like a trailer to a bad movie, for AIDS.

And yet, we’re all still here! Oh sure, we’ve lost a few of the slowest gazelles in the herd, but in the grand scheme of things that number is just a blip. And as Boomers head into their so-called Golden Years, they are feistier than ever, refusing to step aside for the next generation.

Boomers have long been called “the pig in the python” – that giant, undigested bulge that slowly travels down a snakes body. Everything else at both ends doesn’t get the attention it deserves because all focus is on that bulge.

The generations that follow behind us have been waiting somewhat patiently for us to go our merry way, but as you can see, that just isn’t our plan. We’re like a human generation of cockroaches and we’re having way too much fun on this almost invincible ride. So Generation X, Y, Y-not and Z, you all just have to wait your turn. It’s going to be a while still.

Posted by Peter Anthony Holder at 3:26 AM