Candy Is Dandy, But Costly 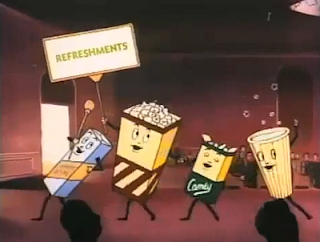 I have probably spent more time in a darkened movie theatre than most people. I grew up being a major film buff. As a teenager I spent six years working in cinemas in jobs from usher to projectionist. And one of my first gigs in the media was as a movie critic. So I have a bit of experience sitting in the dark, feet on a sticky floor, watching still pictures bounce off the wall at 24 frames per second. In my theatre working days I also sold quite a bit of merchandise at the concession stand. Because of this, I find a current lawsuit in the news rather amusing.

In the state of Michigan a class action case has been filed against the AMC Theatre chain. It would appear that a penny-pinching patron is upset because of the high cost of movie snacks and the double whammy of the movie house denying him the ability to bring his own soda and candy in. Oh, the horror!

The 20-something plaintiff says he’s tired of movie theatres taking advantage of him. He's suing because he believes the chain is in alleged violation of Michigan's Consumer Protection Act.

While I cannot dispute that movie snack prices are outrageous, I can also state from personal experience that this has always been the case. Let’s go back to the simple days of my youth when everything was cheaper (no, a loaf of bread wasn’t a nickel; that was in my Dad’s day!)

In the outside world (that would be any corner store) I could get a ten ounce Coke for fifteen cents and a bag of chips for a dime – total expenditure, one whole quarter. In the movie theatre that I worked at, that quarter wouldn’t even get me the same sized drink. That was 35 cents (and that drink was considered the small cup, which we kind of hid away because we were prone to selling larger ones). The bag of chips was 50 cents. So, you see, the movie theatre mark ups were disproportionately high then too.

In today’s world, it’s not only the mark ups that are high, but the size of the containers the food comes in. Soft drink cups so large that they have an undertow, and popcorn containers big enough to require a gas station pump to add the butter, seem to be the norm. And with those big containers, naturally comes even bigger prices.

Analysts recently reported that for every dollar spent on candy and soda in movie theatres, 85% is pure profit. Another study shows that $30 worth of raw popcorn is worth as much as $3,000 to movie theatres.

And contrary to what some in the general population believe, theatres don’t really make their money on the ticket prices, as most of that goes back to the studios. Theatres clearly get their biggest bang for their buck playing the role of pusher to the sugar junkies that line up like Pavlov’s dogs at the mere scent of popcorn in the air. Believe it or not, the high cost of the food is what’s actually keeping the ticket prices where they are (and many believe they are also high enough as it is already).

Going back to my movie working days, we were very cognisant of understanding on which side our popcorn was buttered. I was a master at making popcorn. The trick was making about three or four batches the normal way in those big industrial machines; then adding another batch that was heavily laden with popcorn salt. When you mix them all together that salty kernel you popped in your mouth was like a time released capsule designed to make you want to drink more (and possibly stroke out a diabetic).

So I understand the anger some might feel about being gouged at the candy counter. And I sympathize with the fellow that feels so strongly about the prices that he wants to sue. But conventional wisdom doesn’t believe this lawsuit has any legs. And for me, I believe the reasons for failure are two-fold. One, nowhere does it say that you have to buy snacks; and two, how did we get to a point in society where people can’t even last 90 minutes without eating?

When I go to the theatre, I fill up on entertainment, not snacks. Movie theatres probably hate me, because all they’re getting out of my wallet is the price of admission.

Posted by Peter Anthony Holder at 1:56 AM