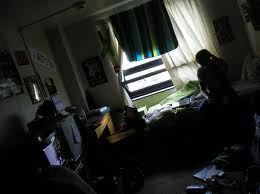 This is a reprinting of a story I wrote over 20 years ago. It was originally published in the Montreal Suburban on Wednesday, November 27, 1991

When it comes to dating, a lot of the pressure is on the male once he has made up his mind to impress the object of his affections. Women bring out their magnifying glasses to scrutinize potential Romeos, and first impressions are very important.

Most men seem to understand this. That is why they're on their best behaviour on the first few dates. They eat with the right fork, listen attentively to their date's conversations, reply with witty remarks and facial reactions that were long practiced in the mirror and most importantly, they keep all of their bodily functions in check and under control.

Where men seem to fail is when they bring a woman home to their apartment for the first time. Cars are an extension of what a man thinks his personality is like. Apartments, however, tell the truth. This is the reason why Home Dating Etiquette is so important. A few rules to live by:

1) Except In Frat Houses, Carpets And Clothing Are Not Interchangeable:
Men have a tendency of dropping their clothing on the floor to mark the spot where they originally took it off. This habit usually results in a trail of slightly soiled garments that take on the characteristics of a multicoloured throw rug....not a pretty sight. Likewise, the half hearted attempt to stuff all of the refuse in one location at the last minute is almost guaranteed to backfire. Don't forget guys, the lady probably won't go to the extreme of wearing white gloves, but she is checking you out. She's going to open doors and closets, and if she picks the wrong one, you'll need a winch to get her from underneath last month's laundry.

2) If Mom Wouldn't Like Your Magazine And Tape Collection, Chances Are Your Date Won't Either!:
From the time you have met the "soul mate of your dreams," you have been trying to show her that you're a sophisticated, sensitive, modern man who treats women as equals, not sex objects. You enjoy her company, and you love her mind. This image will go out the window if she finds Miss January hanging in the linen closet, and Snow White Enjoys The Seven Dwarfs sitting on top of your VCR.

3) Serve Drinks In Real Glasses:
Living alone is not like living with Mom. All you had to do there was to open up a cupboard and take out a glass. You never had to concern yourself with how it got there. As a bachelor, however, you have to learn how to buy glasses. Glasses you get from your favourite fast food restaurant or in a box of detergent are fine when the guys are over watching the ball game. But real women don't like to be wined and dined while drinking out of something that has either Tweety Bird, R2D2 or "Go Jays Go" on it.

5) Dinner Should Not Have Originally Rattled In A Box:
Nobody is expecting you to be a gourmet chef, however, your date would like to know that a little effort went into the evening. If when she arrives, you pop something into the microwave, and it's finished before her chair is warmed, she won't be amused. Likewise, anything served in an aluminum tray or little cardboard boxes won't go over big either. Adult food would also be a good idea. One rule of thumb is to avoid serving culinary delights most commonly associated with stadiums.

If you are lucky enough to survive the evening by using these helpful tips, she may actually return future calls to her answering machine. Should you fail to follow these simple instructions but still get another chance, then that's either a sign that you should marry this woman immediately, or a warning never go to dinner at her house.