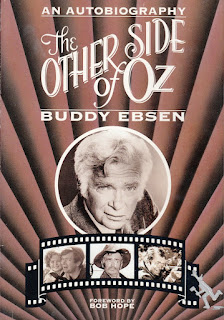 Stuph File Program listeners, another video slide show awaits you! This one hails from June’s show #0147. It's a retro interview from my celebrity audio archives that features an actor who, sadly, is no long with us.

Over the last 25 years or so, I’ve had the pleasure to talk to some great stars of the past. This time around it’s a chat I had back in March of 1994 with Buddy Ebsen.

He was best known for his role as Jed Clampett on The Beverly Hillbillies and as detective Barnaby Jones. At the time that we spoke he was promoting his just released autobiography and was just a month shy of his 86th birthday. He was a sweet and gentle kind soul and an absolute joy to talk to.

His autobiography, as the title suggests, touches on the fact that he was originally cast for a role in The Wizard Of Oz, but was forced to drop out at the last minute. The book in entitled The Other Side of Oz.

Watch the slide show on YouTube while the audio plays! Share the link with fans of TV's long running Clampett clan!