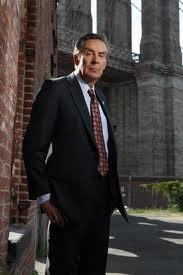 Stuph File Program listeners, another video slide show awaits you! This one hails from April’s show #0138. It's a retro interview from my celebrity audio archives that features an actor who, sadly, is no long with us.

Over the last 25 years or so, I’ve had the pleasure to talk to some great stars of the past. This time around it’s a chat I had back in August of 1997 with Jerry Orbach.

He was best known as Detective Lenny Brisco on the long running NBC police drama Law & Order. Jerry was actually here in Montreal on vacation. He came to town to check out the Just For Laughs Festival that summer. Just For Laughs is another place that I work, so it gave me a chance to catch up with him and go through his career a little bit.

I caught up with him at the bar at the Delta Hotel, which for years was sort of the nerve center for those participating in the festival.

Watch the slide show on YouTube while the audio plays! Share the link with fans of TV's long running Law & Order!

Posted by Peter Anthony Holder at 12:09 AM