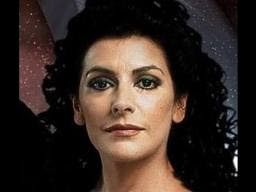 Stuph File Program listeners, it's time for another video slide show. This is a recent one from this month's show #0148.

It's a chat with Marina Sirtis, best known as Deanna Troi, on Star Trek: The Next Generation.

She was on the show talking about her career and the fact that it's the 25th anniversary of when the sci-fi classic first went on the air.

It's the second time over the years that I've had the chance to talk to her and both times she was utterly charming and engaging.

Watch the slide show on YouTube while the audio plays! Share the link with fans of TV's Star Trek: The Next Generation!

Posted by Peter Anthony Holder at 3:11 AM