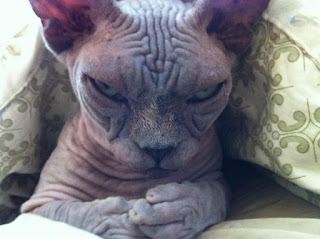 After sharing my warnings with you in a previous post concerning the evil plot that cats worldwide have against mankind, I quite frankly wasn’t going to write about their plans for world domination so soon. After all, one has to lay low because those who are onto them are of course in danger themselves. However a recent story in the news has alarmed me into taking action once again. Let me tell you about a heinous creature named Oscar – a soldier in their cause who acts like a cat in the wild, preying on the weakest of our herd.

Oscar the cat lives in Providence, Rhode Island and according to a recent essay in the prestigious New England Journal of Medicine, he seems to have an uncanny knack for predicting when nursing home patients are going to die, by curling up next to them during their final hours. His accuracy, observed in 25 cases, has led the staff to call family members once he has chosen someone. It usually means they have less than four hours to live. It’s as if he were a game show host asking them to come on down to make their final bid.

It was Dr. David Dosa, a geriatrician and assistant professor of medicine at Brown University, who wrote the article in question. As he was quoted as saying, “He (Oscar) doesn't make too many mistakes. He seems to understand when patients are about to die. Many family members take some solace from it. They appreciate the companionship that the cat provides for their dying loved one." I, of course, have another theory. Oscar has been snuffing the old folks out!

The two-year-old feline was adopted as a kitten and grew up in a dementia unit at the Steere House Nursing and Rehabilitation Center, one of those many facilities that I like to refer to as “God’s waiting room” (have you ever visited the solarium in one of these establishments? It’s like life at the back of the fridge). This place treats people with Alzheimer's, Parkinson's disease and other illnesses – the slowest gazelles among us. After about six months, the staff noticed Oscar would make his own rounds, just like the doctors and nurses. He'd sniff and observe patients, then sit beside people who would wind up dying in a few hours. Dosa said Oscar seems to take his work seriously and is generally aloof. "This is not a cat that's friendly to people," he said. Gee, a cat that’s aloof. Stop the presses!

Oscar is better at predicting death than the people who work there, said Dr. Joan Teno of Brown University, who treats patients at the nursing home and is an expert on care for the terminally ill. (Is she really an expert? She just said that a cat is better at the job than she is!)

Teno was convinced of Oscar's talent when he made his 13th correct call. While observing one patient, Teno said she noticed the woman wasn't eating, was breathing with difficulty and her legs had a bluish tinge, signs that often mean death is near. Oscar wouldn't stay inside the room though, so Teno thought his streak was broken. Instead, it turned out the doctor's prediction was roughly 10 hours too early. Sure enough, during the patient's final two hours, nurses told Teno that Oscar joined the woman at her bedside.

Just how closely is the staff watching Oscar? How do we know if he’s not unplugging vital equipment, increasing morphine drips or using the time honoured form of attempted homicide that many cats use – planting themselves on the faces of unsuspecting sleeping victims and smothering them like a furry pillow of death? Does anybody even check to find out if these victims might have been allergic to cats?

Has anyone thought of the horrific final moments of these poor souls? They are left at the mercy of a calculating killer who has carte blanche, choosing his victims and dispatching of them in the same heartless way that Dick Cheney eliminates hunting buddies.

Doctors say most of the people who get a visit from the sweet-faced, grey and white cat are so ill they probably don't know he's there, so patients aren't aware he's a harbinger of death. Most families are grateful for the advanced warning, although one wanted Oscar out of the room while a family member died. When Oscar is put outside, he paces and meows his displeasure (of course, he can’t add to his personal morbid body count! He’s not there for his countdown to the last breath).

No one is certain if Oscar's behaviour is scientifically significant or points to a cause. Teno wonders if the cat notices telltale scents or reads something into the behaviour of the nurses who raised him. Nicholas Dodman, who directs an animal behavioural clinic at the Tufts University Cummings School of Veterinary Medicine and has read Dosa's article, said the only way to know is to carefully document how Oscar divides his time between the living and dying. If Oscar really is a furry grim reaper, it's also possible his behaviour could be driven by self-centred pleasures like a heated blanket placed on a dying person, Dodman said.

Just think how satisfied Oscar must feel. He continues to increase his body count and the unsuspecting humans are honouring him for it. Death, where is thy sting? Apparently it comes in the form of a homicidal hairball.

(Also see: Cats Are Evil! & More Proof Of The Evil Of Felines)

Posted by Peter Anthony Holder at 11:38 AM